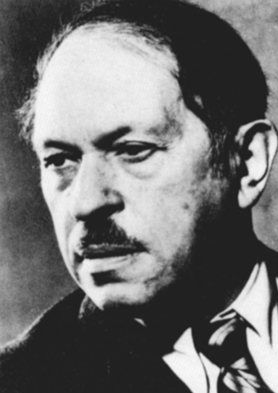 In fact, Wilhelm Henryk Hořitza (he came from the Czech family) – Polish director and theater director, theater critic, co-founder of the so-called Polish monumental theater, a writer, journalist and translator. He began his education in Lviv and Stryj, he graduated grom high school in 1908. He studied classical philology, art history and German at the University of Vienna. In 1914 he joined the Polish Legions. In 1916 he married Stanisława Gozdecka. In the years 1917-1918 he worked as a German teacher in junior high school in Lviv. In 1918 in Warsaw he went through the military service in the Economic Department of the Ministry of Military Affairs. He left the army in the rank of Captain in 1921. In the years 1922-1931 he taught drama and theater history at the State School of Drama, which he became a director in 1929. Since 1920 he belonged to a group Scamander (he was the author of an artistic manifesto of the group and editor of the magazine “Skamander”). In 1921, together with Jarosław Iwaszkiewicz, he ran experimental theater Elsynor. In the years 1922-1931 he taught the history of drama at the State School of Drama (since 1929 he was the director of the school). In 1924 he joined Wojciech Bogusławski Theatre. He became artistic secretary and playwright. In 1925, Horzyca was in charge of this stage together with Leon Schiller and Aleksander Zelwerowicz.

In the years 1931-1937, Horzyca was the director of the Municipal Theatres in Lviv (collaborated, among others with directors – Leon Schiller, Edmund Wierciński, Bronisław Dąbrowski, set designers – Władysław Daszewski, Otto Axer and Andrzej Pronaszka). In the theater he composed a repertoire based on Polish classics (“Forefathers’ Eve” by Adam Mickiewicz and “Silver Dream of Salomea” by Juliusz Słowacki in the staging of Schiller, “Clearing of the Greek envoys” (Odprawa posłów greckich) by Jan Kochanowski in the staging of Horzyca and directed by Antoni Cwojdziński, as well as Stanisław Wyspiański and Cyprian Norwid, Wojciech Bogusławski, Aleksander Fredro). Also the world classics appeared (Calderon and Shakespeare), as well as contemporary drama (George Bernard Shaw, Henrik Ibsen, Gilbert Keith Chesterton, Luigi Pirandello). Horzyca did not to sign the realizations with his name, because he hadn’t yet the directing qualifications (he acquired them in 1939). In 1937, he was a co-director of the National Theatre in Warsaw (in season 1937/38 with Ludwik Solski, in 1938-1939 with Aleksander Zelwerowicz).

In the years 1930-1935, Horzyca was a member of parliament from the Non-Partisan Bloc for Cooperation with the Government – but he was not interested in strictly political activities. In parallel with work in theaters and sejm, he dealt with translations. He was the author of translations, among others, of “Danton’s Death” by Georg Büchner, “From morning until midnight,” by Georg Kaiser, stories of Joseph Conrad, “Magic” by Gilbert Keith Chesterton. He published essays (for example about Słowacki, Norwid, Wyspiański, Lechoń and Zelwerowicz). He collaborated with “Scena Polska” and the daily “Epoka”, he edited socio-literary magazine “Droga” (1928-1937), and he was the editor of the weekly socio-cultural “Pion” (1937-1939). For merits in the field of journalism and publicity, he was awarded in 1936 the Officer’s Cross of the Order of the Rebirth of Polish. At the beginning of World War II he was in Lviv. He returned to Warsaw in 1940. Here he worked as a translator in the Municipal Council, lectured the history of literature in secret courses and edited the underground magazine “Nurt” together with Ferdynand Goetel (1943-1944).

In 1945, he became the deputy director of Stanisław Wyspiański Theatre in Katowice, later he became director of the Earth Pomeranian Theatre in Toruń. He held this function until 1948. (Since September 1947 he was also the director of the Municipal Theatre in Bydgoszcz). In Toruń he put into practice the ideas of the monumental theater, whose concept he already realized in Lviv in the thirties. Here he realized the classics: “Midsummer Night’s Dream” (1946) and “Romeo and Juliet” by Shakespeare (1947), “Behind the Scenes” by Norwid (1946), “Life is a dream” by Calderon (1947), “The Wedding” by Wyspiański (1947) as well as contemporary dramas, among others: “Magic” by Chesterton (1947), “Caesar and Cleopatra” by Shaw (1948), “Pugacheva” by Yesenin (1948), “Two Theatres” by Szaniawski (1946) and “Orpheus” by Anna Świrszczyńska (1946). In the years 1948-1951 he was the director of the Polish Theatre in Poznań, where he repeated many of Toruń stagings. In the 50s he directed the performances in, among others, Polish Theatre in Wroclaw, Jaracz Theatre in Olsztyn, Słowacki Theatre and Stary Theatre in Krakow, Contemporary Theatre and National Theatre in Warsaw. In 1957, Horzyca was appointed the the director of the National Theatre, and held this function until his death.

In 1960 the Pomeranian Earth Theatre in Toruń was renamed Wilam Horzyca Theatre.