Antoni Ferency “The fall of the first people”
Directed by: Iwona Kempa
Set: Mirek Kaczmarek
Music: Bartosz Chajdecki
Pre-premiere: December 15, 2012
The Bible and the subway. Adam and Eve, here: Man and Woman, work hard in defective cars. Underground subway tunnel as a biblical paradise. They will also be apples and first kiss. The discovery of nudity and shame. Disobedience to a Superior (builder, architect, God …?) and the title fall. The new version of the biblical story. Funny, surprising, typically Polish, because this is the Warsaw subway with Russian cars and faulty gates. Again, everything starts from the beginning. This time without the heaven and light, without plants and animals, without the snake. The myth of lost paradise mixed with the reality of contemporary underground world under construction. Is it just a stage joke of Anthoni Ferency who lives nearby the subway or perhaps a catastrophic, grotesque vision of a new beginning of mankind? Or maybe both?

From the review:
It is worth to see the performance for the excellent acting. (Arkadiusz Stern, teatr dla Was, 31.12.2012)

By the decision of the Artistic Committee composed of: Jacek Sieradzki (chairman), Andrzej Lis, Bartłomiej Miernik, Grzegorz Reske, Joanna Targoń, Joanna Wichowska, Kalina Zalewska, the text of the drama “The fall of the first people” by Antoni Ferency has qualified for the final of the 19th National Competition for Staging of Polish Art Contemporary. The Jury will read final texts between May 10 and June 15, 2013.

National Competition for Staging of Polish Contemporary Art aims to reward the most interesting repertoire searches in Polish theater, to support Polish dramaturgy in its stage realizations and popularizing Polish contemporary drama. The competition is organized by the Ministry of Culture and National Heritage and Zbigniew Raszewski Theatre Institute in Warsaw. 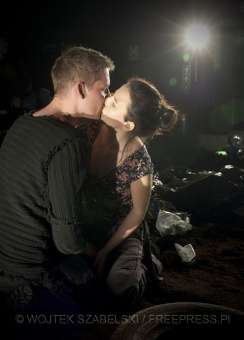